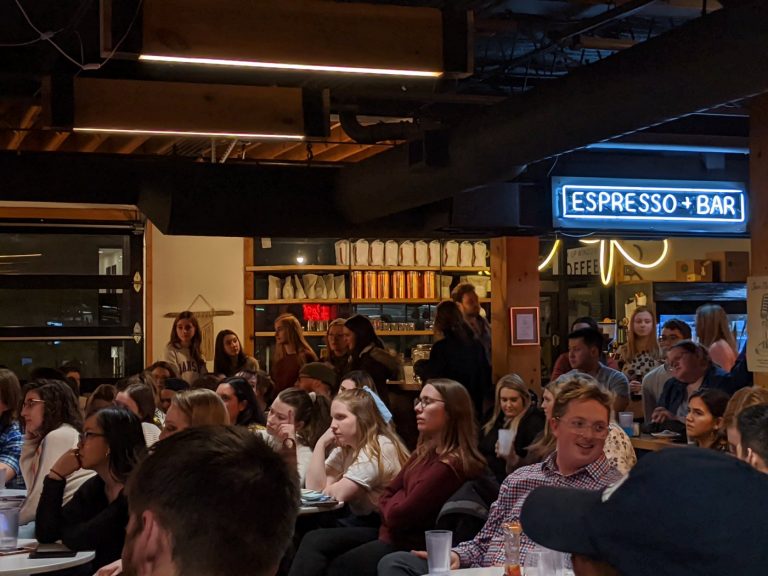 On February 21, GoodCo.’s Open Mic Night brought together some of the best talent University of Kansas has to offer, from music to poetry, and even stand-up comedy from a nun.

“We’re definitely surprised,” KU sophomore and GoodCo. Student Leader Belle Antonacci shared with KJHK. “We were not expecting this many people, but we’re very excited about it.”

The official headcount stopped after 280, so Antonacci estimated that there were over 300 attendees.

GoodCo., formally Good Company, is an organization based out of the Saint Lawrence Catholic Center on campus and open to all. The mission of GoodCo. is to embody a Christian lifestyle through authentic connection and friendship.

“There’s a lack of authentic connection in today’s society,” Antonacci said. “We want to care about people for who they are and have a good time. Put good company with Good Company.”

Here are some fantastic performances of the night:

Sierra Buskirk, a fourth year student in the College of Liberal Arts and Sciences, had the whole audience whooping and hollering with her ukelele cover of Elle King’s “Ex’s and Oh’s.”

“I’ve been singing since I could talk, and I got my uke for my sweet sixteen, so I’ve been playing for six years now,” Buskirk said.

Buskirk has performed everywhere from the Lawrence Performing Arts Center to Carnegie Hall, where Buskirk sang with the Lawrence Children’s choir when she was just 14 years old.

“I always get nervous and anxious onstage, but when I start [performing] everything goes away,” Buskirk said.

As of now, Buskirk has no upcoming performances, but you can find her around the Lawrence Open Mic Scene.

Sister Raffaella, one of the Saint Lawrence Catholic Center’s spiritual directors and resident apostles of the Interior Life, also charmed the crowd with a stand-up comedy routine.

“I like to tell stories,” Sister Raffaella explained, “and someone heard my stories and asked me to put something together [for this event].”

The Open Mic was Sister Raffaella’s first stand-up performance, which she wrote at 6:30 p.m. the same evening.

Much to Say About Nothing

Last but not least, Much to Say About Nothing, a burgeoning local band, took the stage. Made up of two KU sophomores, Josh Rubino and Nick Velo, and their friends Adam Crouse and Aaron Moraga, the band formed in January and have been developing their sound.

“Making music together is the most fun I’ve had,” Crouse said about the band.

Much to Say About Nothing performed their original song “Town to Town” from their upcoming record, adding saxophone and ukelele to Velo’s bass guitar and Moraga’s cajon.

When asked about their sound, Velo defined it as, “indie, mov[ing] towards funk influences, jazz… All over the place but [we’re] bringing it together really nicely.”

Rubino described their experience at the Open Mic as “eye opening.”

“We [weren’t] expecting it to go over so well, but we got a lot of compliments and networking opportunities out of it,” Rubino said. “It gave us a ton of motivation to get some music recorded. We really appreciate GoodCo. and McLain’s for this opportunity.”

You can find Much to Say About Nothing on Instagram and Twitter @muchtosayband, and GoodCo. on Instagram and Facebook @goodco.ku. GoodCo.’s next event will be Supper Chill, a free dinner following 5 p.m. Mass, this Sunday at 6 p.m. at the Saint Lawrence Center.