The Best Worst Movies That Deserve A Cult Following 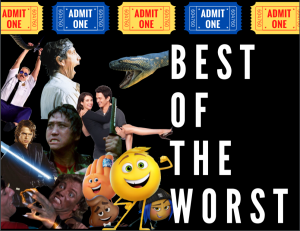 Whether you’re a fanatic of the “they’re so bad they’re good” movies like me, bored of everything on Netflix, or just need a good cringe-filled movie night with your friends, these movies will soon become some of your favorite go-to’s. In my humble opinion, these movies deserve way more hype than they are given credit for due to their pure campiness and the ironic joy they produce.

Disclaimer: The following movies have bad acting, are poorly made, but are a guaranteed good time.

First on the list, and first in my heart, The Emoji Movie. This movie is a pun-filled adventure set in Textropolis and is exactly the corporate-sponsored movie you think it is going to be, which is what makes it so bad it’s good! If you want to hear Sir Patrick Stewart make way too many poop jokes for anyone’s own good, this is definitely a movie the whole family will enjoy.

Up next, an unforgettable part of my childhood and cinematic masterpiece, Paul Blart Mall Cop. I am a firm believer that not enough people talk about Paul in their everyday life. In this movie, Paul Blart gets beat up by a bird while beautiful piano music plays in the background. That scene, I would argue, deserves an Oscar. Mall Cop Conventions, Hotel Art Thieves, and Segways… need I go on?

Who isn’t a sucker for a pizza-based Romeo and Juliet spin-off movie set in Little Italy, Canada? If you’re craving a cliché rom-com or a pizza, look no further than Little Italy. This movie has plot holes and fake Italian accents but nevertheless, it’s a good watch. Now that I’ve got you hooked, grab a pizza, a crew and start viewing this (should be) beloved film.

It’s a bird, it’s a plane, it’s a… super low budget Superman movie? The costumes and special effects in this film are quite outrageous, however, I would argue the side character that steals the show is a young Jon Cryer (you know… the guy that’s not Charlie Sheen from Two-and-a-Half Men). Jon Cryer’s completely fake and hilarious Californian accent deserves a fan-page all of its own.

If you’re a Star Wars fan you may be opinionated on this one. Whether you highly agree or disagree, I’m not apologizing for putting this on my list. Although Star Wars has a cult following when people think of the saga, they’re not usually talking about the prequels, and if they do, it’s only about Jar Jar Binks. Episode III sets you up for the ultimate showdown between Anakin Skywalker and Obi-Wan Kenobi that will get you and your friends quoting the choppy dialogue for months.

Anaconda is like Sharknado, but with snakes, and if you watch the original, Owen Wilson (cue the wow jokes). If you’re not a fan of thrillers or scary-ish movies, no need to worry, the snake is comically animatronic and CGI all at the same time. With the combination of J-Lo, Ice Cube, and Owen Wilson acting their hearts out, this movie will leave you wondering why more people aren’t talking about it.

I’m not usually a fan of action movies, but throw in a rag-tag crew of rock stars that do martial arts on the side and I’m in. In the movie, a band named Dragon Sound fights against the rampant Miami Ninjas to a killer rock and roll soundtrack. Wildly obscure and fun, this movie is a must-see for every fan of the ’80s.

Honorable Mention — If Miami Connection is really up your alley, or you have a sweet spot for ’80s nostalgia, you may want to check out the web series Kung Fury. This series is based around David Hasselhoff, dinosaur cops, and a time-traveling Hitler.