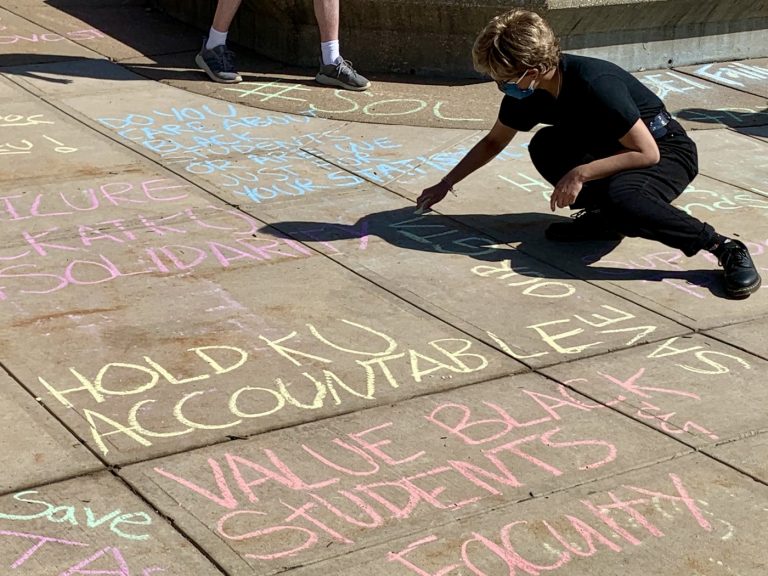 Defend Not Defund: Solidarity Among Student Coalitions in Fight Against DEI, GTA Cuts

The KU Black Student Coalition (BSC) is at the forefront of a movement to make the University of Kansas a more welcoming university for all underrepresented students, and to denounce budgets cuts to Diversity, Equity, and Inclusion (DEI) programs, ethnic studies, and graduate teaching assistant salaries.

March 11, BSC members filled the sidewalk in front of Strong Hall with chalk messages directed towards administration while waiting for the protest and sit-in at Strong Hall to start. Some messages called for the administration to “defend not defund” DEI programs and “listen to students,” while other messages explicitly showed disapproval of administration, like “KU doesn’t care about Black people.”

BSC President Niya McAdoo and Vice-President Keir Rudolph formed the coalition in September 2020 after they met at a protest in response to the court decision to not charge officers for the death of Breona Taylor. Since September, the coalition has become very visible on campus through its movement to support and stand in solidarity with underrepresented students.

Recently, BSC led a week of protests in response to budget cuts to ethnic studies, Diversity, Equity, and Inclusion (DEI) programs, and GTA salaries. The week was planned to also raise awareness of the lack of response from university administration following the January 6 insurrection at the US Capitol. McAdoo said the university’s silence perpetuated white supremacy.

However, for McAdoo, the coalition represents more than just the students of color on campus.

“When it comes to things like these protests, I try to stress to people that even if you’re not a part of these specific communities that we’re highlighting, that doesn’t mean we’re not also speaking up for your rights,” said McAdoo. “There’s plenty of white students on campus, white faculty, white staff who are going to be affected by these changes that are happening.”

The protests on March 11 brought together leaders from the Black Student Coalition, Graduate Teaching Assistant Coalition (GTAC), and the DEI advisory board. The protest fell at the end of a four-day demonstration, led by the BSC and GTAC,  aimed at raising awareness of the DEI and teaching assistant salary cuts. Each day featured a specific protest—social media protest, Provost email flood, sidewalk chalking, and the BSC sit-in at Strong Hall.

The protests brought students from all backgrounds to support and stand in solidarity with the BSC, GTAC, and other underrepresented populations on campus. Many protesters present, like sophomore Beth Lee, recognized their privilege and came out to help lift the voices of underrepresented students and employees.

“[People of color] do so much for the community,” said Lee. “As I white woman, I face some challenges but not anywhere near the BIPOC community. So I want to use my privilege to make KU a safe enough place for everyone.”

Solidarity was a common theme throughout the week, especially between BSC and GTAC. GTAC President Neill Kennedy attended the sit-in and said she sees the solidarity between the two coalitions as the most important part of the movement.

The week included a GTA protest in front of Strong Hall, which was attended by BSC members. Kennedy said up to 40% of the university’s 1100 teaching assistants, mainly in ethnic studies, could be fired as a result of budget cuts on campus.

“I always say your coolest professor was probably a GTA.,” said Martinez. “The person that made you feel the safest, was probably a GTA. They’re totally necessary as well as they’re educators and also they’re working on their own because they’re students.”

McAdoo said despite the lack of attention and inclusion on recent policy changes from the administration,BSC still has allies within the administration. During last Thursday’s protest, Vice Provost of Student Affairs Tammara Durham and Vice Provost for Academic Success Susan Klusmeier met outside Strong Hall with McAdoo and Martinez to give their support for the coalition’s work.

“Those [Durham and Klusmeier] have kind of been some individuals on campus who have been really strong allies and really strong supporters, and listening to us work and trying to work with us,” McAdoo said. “They have been really open to having these conversations and hearing the issues that we’re having on campus, and I hope that that continues to happen.”

BSC stands for so many communities across campus, but the general student population is needed to raise the voices of BSC and GTAC. Martinez said she would like to see more solidarity among the university administration and students.

For the average KU student, getting involved is as easy as taking some time to educate and spread the word across campus.

Kennedy said the university and the internet have the resources for students to learn about the groups on campus fighting against these cuts. She said in order to truly stand in solidarity, students need to understand, whether they realize it or not, that their place on campus impacts the university as a whole.

“I think that’s one of the biggest steps, not just learning but unlearning things as well,” said Kennedy. “You’re at university for a reason, so you might as well take advantage of those opportunities.”