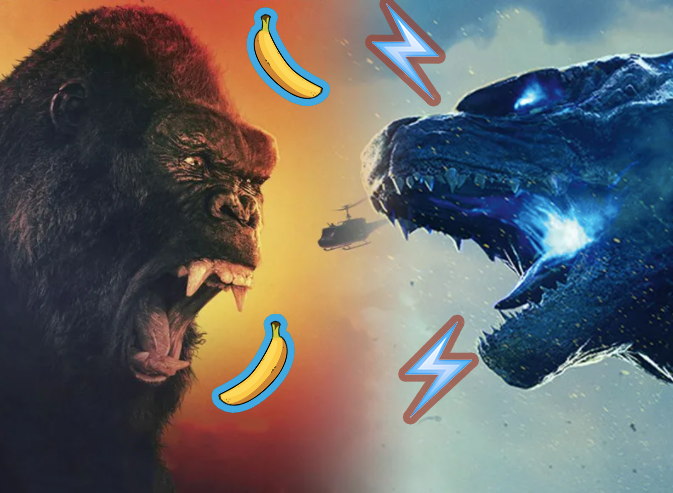 This movie is a great Friday night type movie. It is not an emotional movie or an intelligent movie, and it does not need to be. The audience watches this movie to see King Kong fight Godzilla, and it seems that the movie studio knew that, mostly.

My favorite parts of the movie were the big battles between the monsters. They happen in a variety of different settings and circumstances with different monsters. The monsters themselves have strengths and weaknesses that make sense. Godzilla is faster and more efficient in the water, while Kong is not. Kong can use weapons, most notably the axe he finds before the final battle. Mechagodzilla is very strong, durable, and powerful. Both Kong and Godzilla need to team up to fight him, and even then, they did not get the upper hand until Mecha’s satellite connection was interrupted.

The movie was weaker in my opinion with the human characters. Scenes following these characters slowed the plot down and took screen time from the monsters. I think that this issue was especially evident in the subplot following Madison Russell, played by Millie Bobby Brown. Her group of characters had a lot of screentime, but all their scenes led up to the eventual reveal of Mecha Godzilla. Their subplot could have been cut and the scenes leading to Mecha’s introduction could have been fit in some other way. This would have cut down the run time and made the movie more cohesive.

The reason my rating is so high is because the main focus of the movie is so well done, that the flaws don’t outweigh what I loved. When looking at this movie for what it really should be, a battle between titans, it knocks the ball clear out of the park and maybe even down a few blocks. The fight scenes are super well executed, the design of the monsters is intricate and clear, and the struggle for power between the two is apparent and balanced. Now add the color saturation and design of literally everything else in the movie and you’re watching something that you can never take your eyes off of. Even the underwater fight looked amazing and was crystal clear with the added effects of movement underwater, which is hard to do.

But, as I said, it isn’t without flaws. The title is a little misleading, as the majority of this movie is spent with Kong, which made me think his name should be first in the title. Upon further inspection, audiences (being me) remember that there are already two solo Godzilla reboots and only one Kong reboot. So it makes sense that this one focuses on Kong a little more. Kong also had a connection with a little girl that was native to Skull Island before her people were gone. She was the only one able to communicate with him and the only human he truly trusted. Many of the scenes that involved her and Kong were a little short in my opinion, which means they didn’t really have as much impact on the audience as they could have. I understand they added humans to the mix to give the audience some sort of connection to the monsters, but I don’t think this was needed for Godzilla in this film. It became almost a repeat of King of Monsters which we really didn’t need the same way we needed it with Kong as a character.

We both felt that the human element of the movie was overdone. There were too many scenes focused on the human characters and therefore took valuable screen time from the monsters. We also felt that the inconsistencies in the tech aspect of the movie were too big to miss. Such as Jia teaching Kong a form of sign language while he is under constant surveillance…and then they wonder how he knows it? Or how a small amount of liquid can short out the controls on a major robot lizard. However, the fight sequences, editing and design, and overall portrayal of both Kong and Godzilla make up for the flaws in the movie. It’s not a cinematic masterpiece, but it’s a solid addition to monster films.