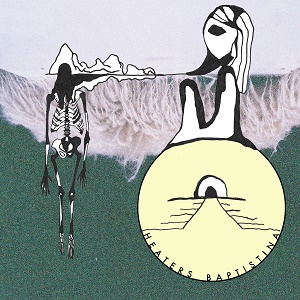 In keeping with their town’s namesake, Heaters, a 3 piece from Grand Rapids, Michigan will take you on some sort of 46 minute, ethereal, effortless, white-water-rafting-esque trip. Their second album release of 2016, Baptistina, is the perfect mixture of fuzz and bass.
Anchored by heavy bass lines and steady percussion, the album comes alive with catchy reverb-filled guitar melodies and vocals that seem to float on top. Every track on the album commands and deserves your attention, each with a very dynamic progression of sounds. The first track, “Centennial” sets up the album, with over a minute of pure instrumental psych-rock as an intro before sneaking in the vocals, which move in and out of the song between extensive jamming. A better taste of the ethereal vocal style comes in for the intro of the second track, “Ara Pacis.” Though a majority of the lyrics are unintelligible for the same reasons, the vocals mix grit and psychedelia in a drawn out and light style, seeming to float on top of the rhythm alongside the guitar. The sound drifts towards the more haunting side of psych rock for track number six, “Dali.” Opened with distorted percussion, followed by a bass line so catchy it’ll spook you and some looming, distorted vocals, the track continues and repeats the most haunting lyrics of the album – and maybe the only audible ones – “I’m looking for something better; I don’t wanna waste my time.” The next track, “Mango,” turns the tone around completely and displays the light-hearted side of psych-rock, with fast, up-beat themes. The ninth track, “Turkish Gold,” is an entirely instrumental, sweet, 2-minute Haze. The album is then wrapped up with “Sea Foam,” and really solidifies the floating sensation with a bubbly combination of sounds that repeatedly morphs between fast hooks and slow break-downs.
Heaters should definitely be on any psych-rock fan’s radar. Give Baptistina a listen and pick some tracks to play at your Halloween party.

Recommended If You Like: Psychic Heat, The Ohsees, Ty Segall
Recommended Tracks: 1 (Centennial), 2 (Ara Pacis), 6 (Dali)
Do Not Play: album is clean
Written by Nadine Alzubbi on 09/29/2016