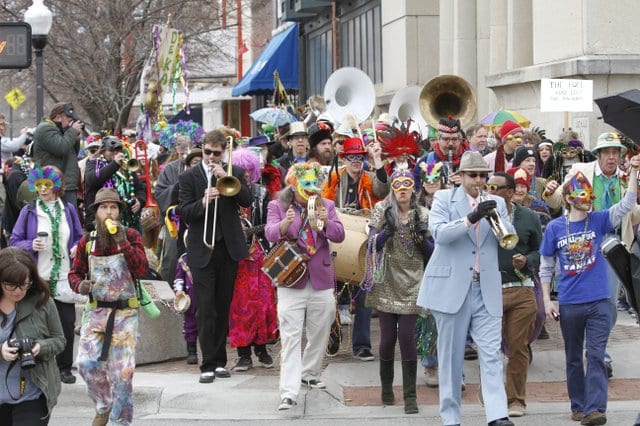 Ad Astra Radio takes a look at a few of the things that make Lawrence such a weird and wonderful place to be!

How does that bumper sticker read? “Lawrence: 28.7 square miles of sanity surrounded by Kansas”? For some Lawrence, KS is a diamond in the rough – an oasis of blue in a profoundly red state. For others, it’s a haven of radicals and whackos. For still others, it’s just a place to live for four years of college and leave behind. But one thing we can all agree on: Lawrence is unlike any other place in the state. Home of William Burroughs, the Get Up Kids, and a panoply of colorful downtown fixtures (ahem, “FREE HEMP”), Lawrence possesses a delightfully eccentric environment in addition to such familiar images as KU and Jayhawk Basketball. For our February 27 episode, we explored just a few of our favorite bits of color from around town.

Live broadcast outro: “Tame One” by Your Friend. Download the full episode or scroll down for individual stories! 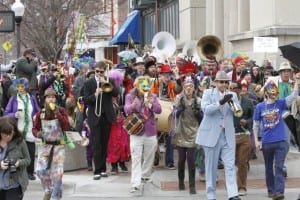 Scott Ross introduces the theme of college town oddity by recounting the memory of a college friend nicknamed Hagrid, who typically wore a SpongeBob shirt and ‘coonskin hat. Music: “Does Anybody Ever See You Out” – Cowboy Indian Bear.

Artist Jason Barr joined Scott and Christine in the studio to share some of his history and perspectives on Lawrence as a unique place, as well as discuss upcoming arts and entertainment events around town. Music: “Action and Action” – The Get Up Kids.

What’s the strangest thing you’ve scene or experienced as a Lawrence Resident? Reporter Beth Fentress talked to people around town and campus to get their favorite Lawrence anecdotes. Music: Ren & Stimpy soundtrack.

When it comes to cities that celebrate being different, New Orleans is our national capitol. Luckily, Lawrence has its own connection: a Mardi Gras parade made up of anyone and everyone who feels like getting into costume, dancing, and throwing beads on a Tuesday afternoon. Scott Ross spoke to Mike West of Truckstop Honeymoon, who founded the event with his wife in the years following Hurricane Katrina. Music: “Mardi Gras in Kansas” – Truckstop Honeymoon

Christine Noriega sat down with KU history professor Jonathan Earle to get the long view, and discuss the history of where the community we know and love comes from – what makes Lawrence, Lawrence? Music: Josh Ritter

Of course, Lawrence isn’t all peace and love. Folks like Brother Jed – the traveling evangelist who occasionally shows up on Wescoe Beach to condemn passersby to fiery torment – see to that. We saw it fit to give a little space to that side of things as well. Music: “Don’t Let the Bastards Get You Down” – Matt Pryor.

Written by Scott Ross. Tune in to Ad Astra Radio the second and fourth Thursdays of every month at 7pm on KJHK 90.7fm.