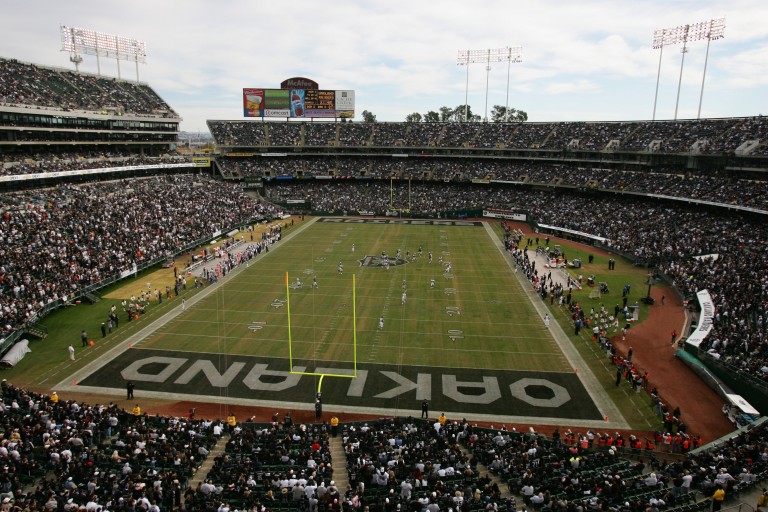 OAKLAND, CA - NOVEMBER 12: McAfee Coliseum is shown during the Oakland Raiders game against the Denver Broncos at McAfee Coliseum on November 12, 2006 in Oakland, California. The Broncos defeated the Raiders 17-13. (Photo by Jed Jacobsohn/Getty Images)

Week sixteen was highlighted by four major upsets and Charles Woodson’s last hoorah. The first upset was the Atlanta Falcons dethroning the Carolina Panthers, 20-13. MVP candidate Cam Newton and the passing game struggled mightily passing for 4 yards-a-clip where the Atlanta Falcons flew high especially, Julio Jones who caught nine for 178 yards and a touchdown. The second upset was the Ravens defeating the Steelers 20-17. Big Ben struggled mightily throwing two interceptions and Pittsburgh has nearly been eliminated from playoffs.

The third upset was the Jets defeating the Patriots 26-20 in overtime. After a Jets 17-3 lead over the Patriots, New England fired back knotting the game up at 20 all heading into overtime. An Erik Decker 6-yard touchdown catch ended the Patriots hopes for a win sealing the “w” for the gang green. The last upset on the Sunday slate was the Rams defeating the Seahawks, 23-17. Rams rookie Todd Gurley rumbled for 85 yards and a huge touchdown in the win.

Charles Woodson suited up for his last NFL home game as an Oakland Raider as the Raiders took on the Chargers at O.co  coliseum. The Raiders defeated the Chargers 23-20 in overtime. Woodson totaled a couple tackles along with first rush of the year as well. Woodson is a Super Bowl Champion, 8X Pro Bowler, 3X first Team All Pro, 2X NFL INT Leader and 2009 Defensive Player of the Year.

There are no more undefeated teams as the Falcons defeated the Panthers Sunday.