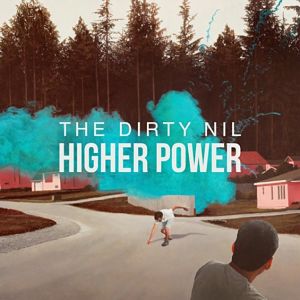 “Punk” has to be one of the most debated labels in the history of music. In a recent interview with Noisey, the members of The Dirty Nil forswore the punk label, which is honestly kind of hard to believe. The band plays an aggressive, unhinged, often fast and noisy style of rock’n’roll. What’s not punk about that?

The first two tracks, “No Weaknesses” and “Zombie Eyes,” have absolutely huge hooks that put both songs in the running for indie-rock song of the year. Those two songs were so good that the rest of the album was honestly kind of a let down upon first listen.

But worry not! “Higher Power” is consistently good after those first two high-water marks. The band maintains the listener’s attention by presenting a variety of tempos, dynamics, and song structures throughout the album. What stays consistent are the fat, ugly, and noisy guitars and pummeling drums that all sound like so many AmRep (Amphetamine Reptile Records for the uninitiated) albums before them.

The vocals are split between guitarist Luke Bentham and bassist Dave who howl and sing throughout, shredding their vocal chords in the process.

Throughout “Higher Power” is the harnessing ’90s alternative, indie, and noise rock. The guitars at the beginning of “Lowlives” sound an awful lot like Siamese Dream-era Smashing Pumpkins. The hook on “Zombie Eyes” sounds like a noisier Pinkerton-era Weezer. The classic rock twang of Dinosaur Jr., the sardonicism of Archers of Loaf…it’s all here.

Recommended If You Like: PUP, Rozwell Kid, Dinosaur Jr., Weezer