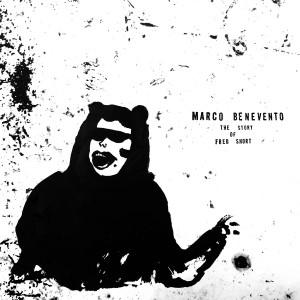 Marco Benevento has dipped his fine tuned pianist fingers into many musical honey pots; he plays keys for Garage A Trois, records at his in home workspace dubbed the Fred Short Studio, and is the co-founder of Royal Potato Family Records, where his solo releases as well as the work of Garage A Trois, Jacob Fred Jazz Odyssey, Stanton Moore, and a whole slew of knee-weakening artists are housed. In addition, he’s been creating solo releases for the last seven years. The Story of Fred Short is Benevento’s sixth solo album, and it’s an absolute beaut. The eleven track record splits between a four track A side and a B side with the seven tracks of the Fred Short suite.  This is only the second solo record featuring Benevento’s vocals, but his self-acclaimed lack of vocal prowess never manifests itself; it sounds like he’s been swelling and harmonizing for a lifetime. He’s joined by Dave Dreiwitz on bass, Andy Borger on drums, and occasionally The Barr Brothers, with Brad Barr on guitar and Andy Barr on percussion.

This release swims through genres, kicking off with “In The Afternoon Tomorrow,” a dreamy indie rock/ psych pop tune. As with every track, it has elements of many genres. Sweeping pop vocals, crisp brushes of bass from Benevento’s Casio drum machine, snyth pop organ, and a catchy as hell guitar riff that could sound just as rad in a surfy psych rock track. The Casio drum machine provides cohesion throughout genre shifts and narrative veins, providing a place for your memory to latch on to. Featured on the A side are three more tracks, all of them kicking and screaming away from being pigeonholed. They dance from gritty blues riffs (“Heavy Metal Floating Upstream”), to funky, tempo pushing bass (“All The Other Dreams”).

The B side unfolds on “1 Intro: The Story Of Fred Short” with a sample of a heartbeat that fractals into an indiscernible voice. This unknown narrator is  vital to the themes in the Fred Short suite though you only hear murmurs, a musing on the blurred line between waking and sleeping, on the beauty of dreaming and a skewed reality. It’s a stretch, but quite applicable in context.  Fred Short is a legend and namesake of the street Benevento and the Fred Short Studio inhabit in a small town  10 minutes east of Woodstock, New York.  Details are vague, but Fred Short floats around in verbal folklore as a sensational human who threw music (and surely libation soaked) festivals on what is now Benevento’s property.

This myth of a man is translated through the seven piece suite as a Henry David Thoreau marrow-sucker of life, someone who dances across the country and cuddles up next to chaos. It’s worth the 20 minutes to sit back and try to wrap your mind around this character that even Benevento vaguely knows. Every moment is carefully orchestrated, and like the A side incorporates uncountable genres. All seven tracks are created to be listened to in one go, each of them warping and shifting into each other; when the heavy rock chaos of “II Seventy Twenty Two” transitions into “III Walking With Tyronne,” an upbeat piano ballad, it feels natural despite the polarity of the tracks.

Tracks five and six  of the suite hearken to a sort of chaos, where a darkness overwhelms both lyrics and instrumentation. Track five, “V Stay in Line” is a strung out, fuzzy rock jam with a piano riff straight out of a heroin-fueled Hendrix session. Chaotic, carefully uncontrolled snyth whirls about in track six, “VI I Can’t See the Light,” where the track’s title repeats over and over in a strange plea. Wrapping up with “VII Follow The Arrow,” the album and the Fred Short suite close in embrace with melancholy.

We don’t know the end of Fred Short’s story, and neither does Benevento. But The Story of Fred Short in it’s beautiful, Casio drum kit fueled madness seems to encourage the spontaneity and small joys of life. As Benevento says in “Heavy Metal Floating Upstream,” “It’s all just a matter of good hope.”

Recommended Tracks: 7 (Walking With Tyronne), 1 (In The Afternoon Tomorrow), 6 (Seventy Twenty Two), 4 (Heavy Metal Floating Upstream), the entire B side