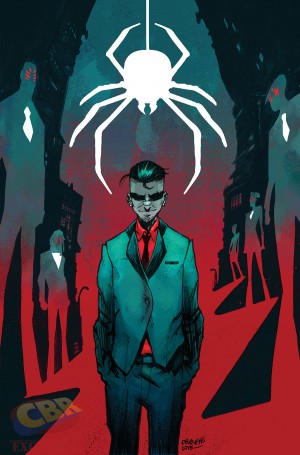 Weavers is everything you love about mob stories; intrigue, suspense, and crime, but Weavers has something most do not: a supernatural twist. Sid Thyme is the newest member of the Weavers a crime family that operates on the east coast. The Weavers’ initiation is not what you would expect; there are no sign-up sheets or anything. Instead, when one Weaver dies, another is made. Each Weaver is bound to a spider that resides inside of them, granting each an ability. Sid was present at the death of one the Weavers’ leaders and was chosen by their spider to replace them, now Sid has got to figure out his ability and prove himself to Don Harvest, the head of the family.

Weavers is written by Simon Spurrier, known for working on X-Force, and other X-men related titles and it is drawn by Dylan Burnett, known for his work on Interceptor. Spurrier’s writing plays really well with the genre of the book. It conveys the hard, gritty nature of the story even with the occasional censoring of bad word in the text bubbles. You can get the emotion of the characters solely from what is being said. Burnett’s work is fantastic, giving the actual grittiness to the story with the somewhat sketchy line work and the darkness that pervades every panel. The colorist responsible for this is Triona Farrell, an illustrator from Dublin, who really brings the art together with her use of color. This book has everything: crime, murder, the supernatural, and even a little bit of love. I am excited to see what is next for Sid Thyme and the Weavers.