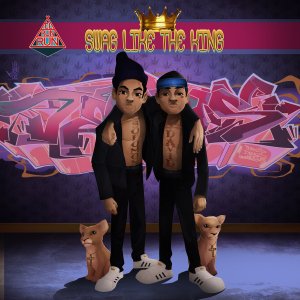 Imagine the most cliché, stereotypical rap song you can think of. Then multiply it by five and you have El-Run Run’s first EP. Swag Like The King is the first release by a duo that has produced music together for the last decade, but has just now decided to release their creations to the world. In the future, they might want to limit their music to high school parties and basement jam sessions, where they’ll be a hit. This EP will (hopefully) never make it big time, but it’s catchy in spite of itself. While the lyrics and flow are reminiscent of that wanna-be rapper friend we all had in high school, (the majority of verses refer to the like of, “you a hater; livin’ life big; smoke, drink, party, that’s what we do”), the music behind the almost comically terrible lyrics aren’t bad. In fact, this EP is pretty decent if you want to zone out and listen to something with over-the-top autotune and a pretty good beat. That being said, if you’re looking for a Kendrick Lamar-style relevance and flow to gush about with your friends, run away as far as you can from this album. Otherwise, the catchiness of the tunes paired with the almost comically terrible lyrics will draw you in and force you to play this EP on repeat, until you bang your head against the wall.