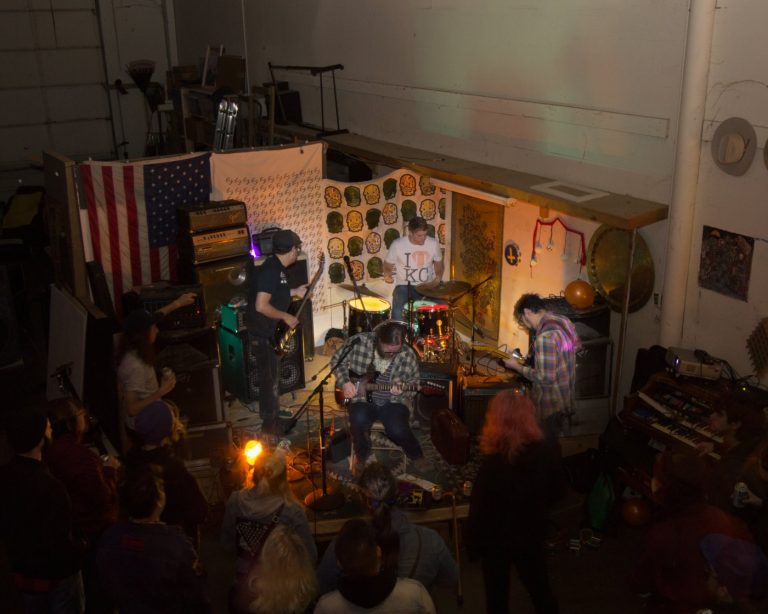 There’s a famous line from Field of Dreams. It goes, “if you build it, they will come.” Well, the same can be said about building a local music scene. If you play it, they will dance.

Whatever Forever Festival took place on November 11 and 12 and showcased over a dozen local bands at venues all around Lawrence. The genres were expansive, the setups DIY, and the crowds, exuberant. It was kind of like a miniature South By Southwest right here in our own backyard.

Forever Fest hosted a total of three live performances at our cozy neighborhood record store, Love Garden. It was one of those heart imploding evenings where you find yourself standing (or sitting rather) in a room filled with friends and neighbors vulnerably laying their passion and collective anger on the line. 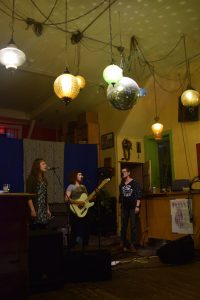 The first band, The Ovaries-eez went on at 7pm.The trio of women sang kindly written harmonies that blended flawlessly. The lyrics of their songs had a theme of sadness and heartbreak. Many audience members were somber and captivated while some eyes filled with tears.  The Ovaries-eez contain a certain quality in their sound which was reminiscent of some type of ethereal angels touching down in this angry tumultuous time we have found ourselves in.The girl’s voices flutter effortlessly also resembling the innocence of a childhood found on a prairie.

Halfway through their set, they announced they would be releasing a new album titled, “Moon Birth”. New songs off the album were performed with intentional vengeance and authority. Member of the group, Monica George thanked the audience for creating a safe space for everyone while pointing out the safety pins each member was wearing. She followed up by offering safety pins for everyone in the crowd. The pins symbolize solidarity to those living with fears invoked from this year’s Presidential Election.

Next up was Heidi Lynn Gluck. As she took the stage, it quickly became apparent that she was a veteran musician and composer. Her voice embodied a special tenacity with combinations of indie, folksy, songwriter styles which left me in a trance. The lyrics and stylization of her ballads were comparable to Neko Case or even Joni Mitchell.

A song titled, “Mercury Rising” was performed with two guests from the audience, one on guitar and the other on the accordion. The accordion could be subtly heard in the background as it smoothed out the tempo of the song and added a tasty treat for the ears. The next song titled, “Wolf” had me wanting to howl along from the audience. For Heidi’s last song, she performed a Leonard Cohen cover that wrapped up the set perfectly. 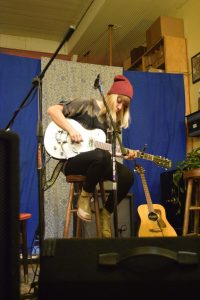 Heidi Lynn Gluck is a refreshing and tantalizing soul added to the Lawrence music scene. She’s got an aptitude for unique songwriting styles. As well as a defined fluidity in her voice range. She invites these traits to come alive with the sweet accompaniment of her electric Gretsch guitar echoing in the room.

Lastly, No Magic’ Ben Sauder brought the house down with his earthly, room-soothing sound. He performed “Summertime Blues” and “Rain Ghosts”. This man adds a twinge to one’s heart with his sweet presence and towering tunes. “Life’s meant to be enjoyed, not feared” was a lyric that hit home for us all.

Each band had a sing-songwriter feel with poetic lyrical structures and inviting sounds. Whatever Forever has a line-up of deeply integrative yet vastly different musicians that are supportive of one another in the local scene.

Night 2 At Studio B – Reviewed by Corey Wogalter

Studio B was the venue for the second night of music. Located inside a kitschy art studio, a makeshift stage exists purely for the purpose of cultivating the local music scene. It was on this stage that some of Lawrence’s finest musicians proudly proclaimed with their voices and their instruments what makes LFK so rad. 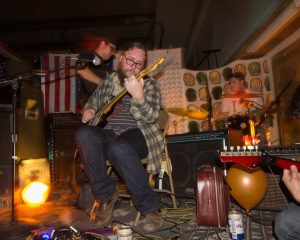 Invisible Public Library was the first band of the night to hit the stage. They sounded a bit like Neutral Milk Hotel, but with less Anne Frank references and more guitar shredding. Their song”Excelsior” rang out through the venue and washed over the crowd like a tidal wave of sound. The bass lines in these songs are what got me, they were of the absolute, highest caliber. And lead singer Brandon Barnett’s powerful lyricism and singing was the perfect kick start to a chilly yet awesome night.

Next up, WIDES thrashed through their set. The three-piece created enormous soundscapes of powerful guitar riffs, sonic feedback, and expansive jams. This was the one set in the night that had me thanking my lucky stars I was wearing ear plugs. WIDES took no prisoners, pummeling the crowd with heavy noise rock and punk. Each song was more thrashy than the one before, and they definitely got the blood flowing.

Toughies took the stage third, and in my opinion, could have easily been a headliner. Their music sounds like the peaceful exploration of a new city. Their songs could soundtrack a slowdance with the one you’ve been making eyes at across the party all night. All of their songs were just stunningly beautiful. It’s safe to say that everyone in crowd had heart-eyed emoji faces. Each of their songs was a sing-a-long, which accentuated how much they are beloved in the Lawrence scene. They closed with “What Are Hands For?” which is an astonishing song. The heavily infectious chorus rang out loud as the crowd swayed, hugged, and embraced lovingly to this fantastic band. 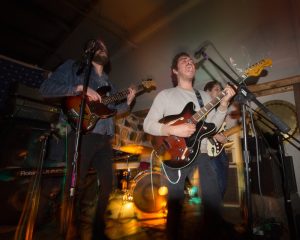 I interviewed the group after the show, and they updated me on next moves for the band.”We’re going to write more music, and put out our third EP this Spring,” said lead singer Carl Smith. They’re also playing a show at Replay Lounge on November 19 followed by a benefit with Ebony Tusks called NOSH! at the Granada on December 1. Check them out, you won’t regret it.

After Toughies, the gloves officially came off as the hard-hitting punk band Gnarly Davidson tore up the stage next. These guys are the nicest dudes ever, but once they touch the stage, it’s like they’ve channeled all of hell’s fury through their amplifiers. I like my punk like I like my cars– loud, fast, and powerful. Gnarly Davidson has all of that and more. Their huge sound could barely be contained on that tiny stage setup. This sonic sucker-punch was exactly what I needed after Toughies got me all in my feelings.

Karma Vision kept the momentum going. As an artist signed to Whatever Forever the label, they represented proudly. They charged through a set of fantastic psychedelic indie rock. Their sound is so positive and joyous, it’s almost guaranteed to plaster a smile on your face. 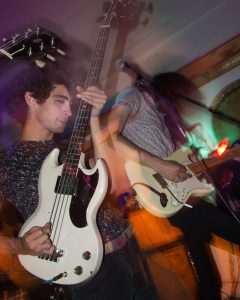 Finally, the moment came for Lawrence’s favorite heart-throbs, Psychic Heat to close out the night. As soon as the band took the stage, the energy cultivated in the venue was so electric in the air, you could feel it in your legs. In fact, the only way to experience Psychic Heat is to get in the center of it, surrounded by dancing fans. Powerful guitar riffs, superb bass playing, and incredible balance in their sound. Their fuzzed out and explosive songs are best received when jumping, dancing, and moshing.

After the music came to a close, sometime around 12:45 a.m., the real party began. Throwback jams like “American Boy” and “A Milli” boomed out of the speakers as the remaining audience members danced, talked and kept the good times going. New friends were made, the vibes were outstanding, and it seemed like the sun coming up was the only thing that could end this picture perfect night.

Whatever Forever Fest was the perfect depiction of Lawrence. It was funky, subtle yet dynamic, and filled to the brim with excellent music.

Support your local scene. Build something. Play it loud.