Off the Mic: Danielle Schablitsky 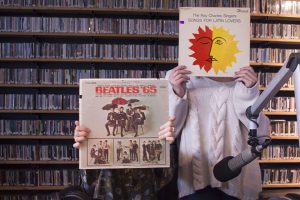 GM: How did you originally get involved in KJHK?

DS: I met my Co-DJ, Sophia, while studying abroad in France and we soon discovered that we had really similar tastes in music. So when we came back from France, she said “why don’t we DJ during our senior year?” And that’s kind of how it all happened.

GM: What drew you towards DJing in particular?

DS: It’s something that has always been interesting, and it’s a little bit intimidating, being on air and all that. But I love being able to discover new music and put that out there for people to hear – I think that is a really appealing part of being a DJ.

GM: Since you met Sophia in France, and you guys were relatively new friends when you began DJing, did you you notice a chemistry start to build as working with each other became more familiar?

DS: Chemistry definitely began to build pretty quickly. We just got along really well and once we figured out that we had similar tastes in music, it took off from there. We showed each other a lot of new stuff, indie music, alternative music. She showed me a lot of new stuff, and I showed her new stuff too, but ultimately we just really liked what each other had.

GM: Sophia mentioned a few of the places she visited while studying abroad. Would you like to share any of the adventures you guys went on?

DS: Yeah! There was this one specific experience – a hiking trip we did – where we caught a ride with an older French couple for a couple of hours, and then we ended up hiking twenty-or-so miles along the coast. It was a lot of fun, and a lot of sand in the shoes. We also rented bikes one weekend and rode twenty-six miles through the French countryside, so like older, smaller French vineyards. It was a lot of fun.

GM: Playing off of your DJing experience, if you could only pick three artists or bands to play for the rest of DJing career, who would they be?

DS: That’s a tough one. I’m really into the Glass Animals right now. I just got into Future Islands – they have a really nice sound. And then, I’d have to say Broods. I’m just starting to get into them, and they have this really nice, chill sound. But, then again, I’m discovering new stuff all the time. 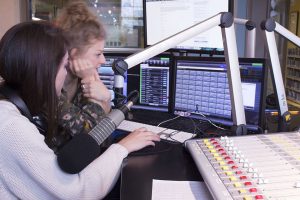 GM: Outside of KJHK, what are some of your hobbies?

DS: I really like to paint, draw, and play guitar a little bit. I also like to read.

GM: What kind painting are you into? I tried to pick it up as a hobby, but it didn’t last very long.

DS: Right now I’m really just trying to find my style, and that is a whole big ordeal. But when I draw, I typically draw people, so I paint people too.

GM: What’s a subject, outside of your studies, that you’re really interested in at the moment?

DS: I’d have to say White Helmets, the Netflix documentary about the volunteers over in Syria. I just watched it. It’s only about half-an-hour long, but it’s really amazing and it really blows your mind. It’s pretty depressing too, so it’s probably good that it’s only thirty minutes long, but it’s very eye-opening.

GM: It’s funny you mention that, because during my interview with Sophia, she mentioned how much she loves war movies.

DS: Yes! That’s actually something else we’ve bonded over. We both really like World-War II movies – I know that’s kind of a weird interest, but it’s something we’re both into.

GM: What type of work would you like to do after college?

DS: Anything involving art would be awesome, whether that means working in a museum or somewhere else. Right now I’m interning in an art gallery and its a lot of fun. Just getting to be around art all the time really helps keep the creativity flowing.

GM: Where do you see yourself living?

DS: That’s a tough one, and as a senior, that’s something I’m asking myself all the time. But realistically, I think I’d love to live in either Denver or Kansas City. But I’m also open to living outside of those two cities – anywhere with a great art scene and lots of artists.

GM: What is one thing that scares you, that you’d like to do at some point in your life?

DS: I want to go to Thailand. My Grandma is from Vietnam, so that whole area interests me. But I think going to a country where you don’t speak the language, and becoming fully immersed in it, is scary in its own way.

GM: What’s one thing you do to relax? Maybe after you come back from Thailand.

DS: I love getting a good book and being outside.

GM: What are some of your favorite books?

DS: Generally fiction books. But my one book, at least right now, would be All the Light We Cannot See by Anthony Doerr. It’s really well-written, kind of sad, but still really good. And surprise, surprise, it’s about World War II.

GM: If you could erase of piece of entertainment – a book, tv show, or album – from your memory, so that you could experience it again, what would you choose?

DS: One of my weird things is that I’m really into film scores, like sound tracks to movies, and I especially like Hans Zimmer. So have you seen Inception?

GM: Yeah, but I never noticed to soundtrack.

DS: Well I love any music by Hans Zimmer, but that soundtrack is just great. And in Interstellar, when they are stranded and the waves start crashing in, I listened to the song, and he added the sound of a clock ticking, because the waves are coming and all that. It’s really genius stuff.

GM: If you could live out the life of any TV or movie character, who would it be?

GM: Definitely a tough question, because most of the characters you see are flawed in some way or another. Like I love It’s Always Sunny in Philadelphia, but I wouldn’t want to be any of the characters, because their all degenerates. But if I had to pick, I’d say Vincent Chase from Entourage. He’s a movie star, so why not?

DS: That’s a good one. See, I’m going down the list of shows I watch. Like, Game of Thrones, that’s a no for obvious reasons. Oh, Ferris Buehler’s Day off. It’s only one day, and who knows how his life turned out after that, I mean, he did skip a lot of school, but that might be a good one. 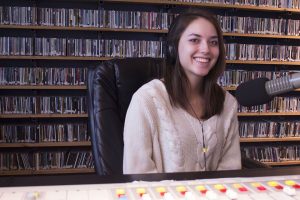 DS: Fall. It’s the prettiest season, and it’s the perfect temperature, but edging on winter. Spring is also really pretty, and my birthday is in the spring, so that used to be my favorite season.

GM: What would you say to the people out there who are reading this, who might be considering joining KJHK, or even DJing?

DS: From my personal experience, I’m generally a quiet person, and public speaking definitely isn’t my forté. So signing up to DJ was really out of my comfort zone, but I really enjoy it now. Once a week I get to come into the studio and talk on air, and force myself out of my comfort zone. And by doing something that I enjoy, but that also scares me, it becomes all the more enjoyable. I also think it’s a great way for people to express themselves; to put themselves in a new environment and challenge themselves, and I think that is really valuable.