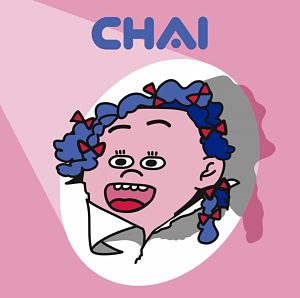 Punk isn’t named after the genre of music. It is about being yourself and not limiting yourself to society’s expectations. CHAI doesn’t put themselves in a box, they define themselves as genre-less and instead focus on creating a personality. Their facebook bio reminds us of their self-empowering lyrics, their love of the color pink, and an insatiable craving for gyozo.

CHAI is made up of four females: twins Mana and Kana, with Yuna and Yuki. Mana, Kana, and Yuna are all from Nagoya, Japan where they attended high school. It was here that the three began to explore Japanese music that went further than the traditional J-pop. They met Yuki at university where she asked them to join a band with her back in 2012.

They released their debut LP, Pink, in 2017. The album featured hits “N.E.O.” and “Gyaranboo.” These songs are forceful enough to bust the speakers in your 2002 Honda Pilot, but their messages are just as powerful. Yuki described the main theme of “Gyaranboo” as being “I’m hairy, oh well.” This aligns with CHAI’s belief that society needs to change its opinion on what is “cute.” “N.E.O.” summarizes the phrase “Neo-Kawaii,” that CHAI coined to represent the new cute. This new cute is essentially a new body image, their songs will tell you that no matter what your nose looks like, you should feel cute.

If this is what the new cute looks like, we can definitely get on board. CHAI performs in bubblegum pink outfits with choreographed dance moves. Not only does this perfectly match their sound, it is a cultural stance. In Japan, pink isn’t a color commonly worn after childhood. CHAI is showing the world that they don’t care and that powerful women can wear anything that makes them feel confident.

If you aren’t fluent in Japanese, listen to the chorus of “Fashionista” or let the cackle on “Great Job” serve as a reminder that you can do whatever you damn well please. Lyrics or not, this track is so upbeat and infectious I feel like I could burn calories just by listening.

Their latest Burger Records release, Punk, features, you guessed it — pink, artwork by CHAI’s very own, Yuki. The ten-track experimental album clocks in just above 30 minutes and is full of girl power. Remember what CHAI chants together before every show, “You guys are cute! We’re cute! We’re awesome!” and listen to Pitchfork’s best new music, Punk.

Recommended If You Like: Yaeji, Kero Kero Bonito, Superorganism, Shamir
Recommended Tracks: 1 (Choose Go!), 6 (Fashionista), 8 (Curly Adventure)
Do Not Play: None
Written by Miranda Roberts on 03/20/2019