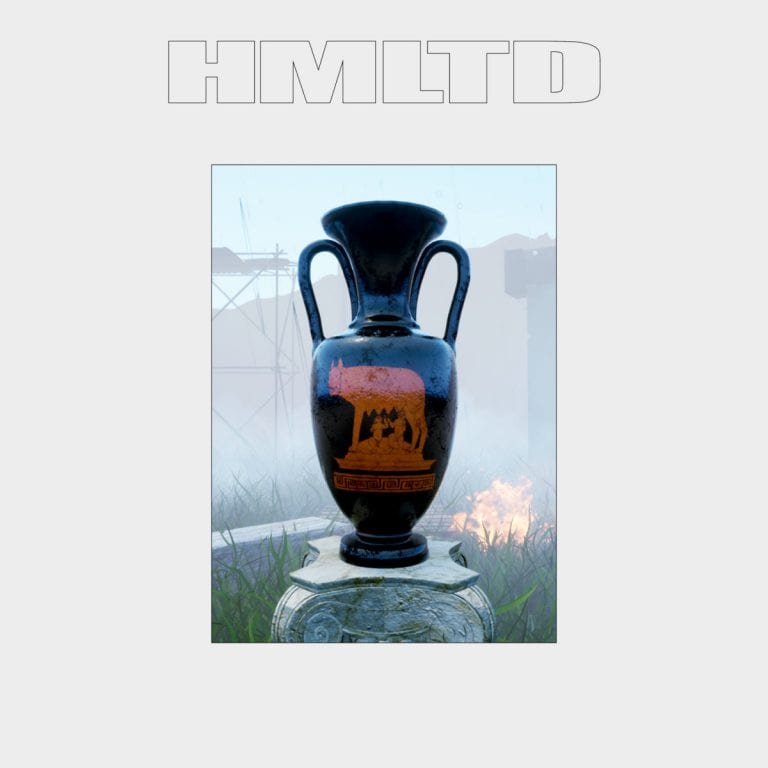 Here it is, the long-awaited debut album of British post-punk, art pop, and glam rock outfit HMLTD (formerly known as Happy Meal Ltd.). West of Eden comes years after the band teased London with numerous singles and a successful EP, Hate Music Last Time Delete EP. Now the time has finally come for the group to show what they are able to accomplish on a full-length project, and the result is more than satisfactory. West of Eden comes as an exploratory, pointed critique on varying missteps that plague western society: toxic masculinity, greed, violence, and more. It delivers these arguments through a myriad of musical stylings; however, they are always thoughtful and forever sharp.

The album begins with a traditional post-punk sound, a deep brooding bass line opens to distorted vocals, static bouncing off HMLTD frontman Henry Spychalski’s words. He speaks of a Eurocentric apocalypse and the downfall of western society. The music stops for a second to highlight Spychalski’s next words: “The West is dead.” The vocals on this track are sporadic, devastating and eerie; he speaks of the coming downfall of modern western society by its own hypocrisies and greed.

“Imagery of natural death,” “A sick pod of dolphins,” and “Two drowned dogs float belly side up” show both the parasitic nature of modern western ideals and make a point on a general lack of concern for the environment. The infectious nature of “The West” is touched on throughout the album, but the most intriguing example of this is found later in this very song: “The Dalai Lama wore Dolce & Gabanna in vermilion red, and the West is dead.” The greed of the west spreads, it takes its materialism to all corners of the earth, infecting even those figures that are meant to be removed from such suffocating worldly sins.

HMLTD doesn’t just limit themselves to this theme, although its placement as the initial song on the album is no less than significant. “Mikey’s Song” and “149” clearly speak of a young man’s obsession, “Death Drive” touches on the American dream (but more broadly relates to being blindsided by a supposed destiny), and the two-part songs on “Joanna” detail the lead singer’s struggle with his masculinity.

The first song, titled simply “Joanna”, opens with jaunty piano chords (I couldn’t help but think of the accordion on “The Mariner’s Revenge Song” by the Decemberists) that juxtapose with the content of Spychalski’s lyrics. Joanna is described as an imaginary friend that others see as a plight on Henry, and multiple figures in his childhood are said to have attempted to separate her from him: his father, teachers, doctors, and his classmates. It’s not long before Henry realizes “that it was really her and [him],” and it becomes clear that this is the story of a child who was perhaps a bit too sensitive for the comfort of the masculine world around him. He sings of “the boys in the crowd” and his father, who are violent against him simply for having a feminine trait. The upbeat instrumentals characterize the innocence of the young boy as he is trying to understand himself in a very important time of his life.

The second song, “Where’s Joanna?,” again plays with the femininity of the singer; however, this time Joanna is a corpse, dismembered and hidden throughout the man’s room. There is a switch from happier piano chords to this eerie guitar, playing the same notes as before, that imports the feeling of insanity. The song is provocative enough with its imagery of death and violence; however, it isn’t overtly grotesque in any way as to not detract from the messaging. In this way the song becomes one of the more thematically successful and poignant songs on the album. It accuses the toxic masculinity of western society of being the reason for possible emotional instability. The pain of his formidable years, of “boys don’t cry” is the very reason he has issues today with understanding his emotions, of processing them in a healthy manner.

One of the most impressive aspects of West of Eden is not its candid messaging, but rather its diverse instrumentals. HMLTD is made up of James Donovan, Duc Peterman, Achilleas Sarantaris, Nico Mohnblatt, and Seth Evans, and as much praise that has been given to Henry could be given to each subsequent artist. The group effortlessly dances from genre to genre using whatever they find fit to craft their art. “The Ballad of Calamity James” and “To the Door” have a spaghetti western feel to them, a call to the American Midwest. “Mikey’s Song” uses sparkly keys and synths throughout giving it an almost humorous tone when compared to the lyrical content. “Why?” and “149” play with art-pop and electronic pop sounds, while “Death Drive” has spiraling percussion that instills anxiety into the listener before the heavier instrumentals enter to take the song away.

The list goes on. It can feel at times as if sonically there is no direction, but this is the farthest thing from the truth. The music hits different points around the West, with clear markers for the American west, British post-punk, the electro-pop and neon synths that ravaged Europe. It could be very easy and tempting to apply the accusations of HMLTD to a singular country, especially the United States, but rather the statements are based on North America and Europe alike. Multiple times along the project we are given location call outs: Central Park, Leipzig, Helsinki, and many more to show that this is a general criticism. They add more places with call outs such as Dolce & Gabanna, Orson Welles, Radio One, and more and the band even clearly states in “MMXX A.D.” that they are speaking of “The new Europe… in every lonely, empty American city”.

It is important to understand these generalities to not be misguided, thinking one system is more or less faulty than another, but rather that “no system is safe” from the group. The band sees the direction of the populist West, the path that fear, greed, and “FILTH” leads towards. No country is safe, nor innocent of these transgressions and perhaps the best way is to just throw it all away, start anew. Who is to say what the true solution is, but there is no doubt that HMLTD presents a compelling argument. At times the group seems to take on a little more than they can chew, but they consistently bring themselves back together and the diversity of the album’s instrumentals lends itself to hours of fresh listens. While it was a long time coming, there is no rushing genius.