All ages, all walks of life; Femme Fest 2019 oozes inclusivity and energy.

“Femmes to the front” read the sign on stage at Femme Fest, an all-ages event that celebrated femmes, gender non-binaries, women, and music. Saturday was the second Femme Fest at the White Schoolhouse. Organizer and creator Paige Batson wanted the event to be more than just a concert.

“We’ve been really striving for a space that allows artists to feel safe and express themselves and in an all-ages environment, where anybody can feel welcome,” Batson said. 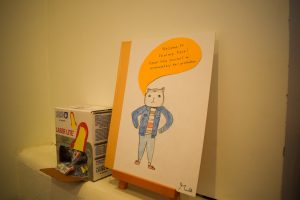 A drawing of Batson advertises free ear protection at the event.

Femme Fest attendee Jerynn Lindbloom said Femme Fest was unique as an all-age, queer event. Lindbloom said she liked to see kids at the event because the queer community is not exclusively adults.

Batson said everyone involved in the event, from door to bar, was not a straight, cis male. Many of performers and vendors were women or gender non-binary which do not necessarily fall under the term “femme.”

“It is an LGBTQIA term to basically describe someone who performs femme,” Batson said. “It is a term that is more queer oriented. When we’re talking about the spectrum of identity, it’s not like black and white.”

The event had eight performers of various sounds: electronic, blues, folk, rock and a poetry reading by Mercedes Lucero. Vigil and Thieves performed their high energy set in the second half of the night. Band members Sarah Storm and Steph Castor said they have worked with Batson before at Girls Rock Camp, and are strong believers in creating safe spaces for expression. 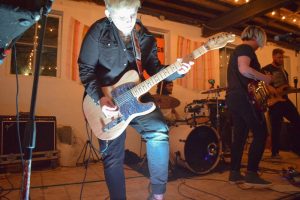 Steph Castor shines during the Vigil and Thieves high-energy set.

“Come support a young and vibrant music community in Lawrence,” Castor said prior to the show. “Not too many places exist like this.”

Outside it snowed, but the harmonies of artists like Heidi Lynne Gluck and Mourning Ritual along with Kawehi’s energetic dance set kept the White Schoolhouse full of warmth. Between sets, many wandered upstairs where the bar sold LaCroix and cocktails next to local art booths and band merch.

Batson told volunteers earlier in the day about the nonprofit, Lawrence All-ages Noise Destination, or LAND, created by her own Petri Productions and the White Schoolhouse. She said the goal is to create a sustainable nonprofit so that in 20 years, places like the White Schoolhouse still have all-age, inclusive shows. 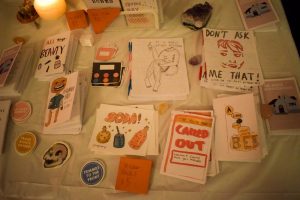 Some fun and educational zines for sale upstairs at the event.

“I hope that high schoolers continue to make music and feel like they can actually become the band that they want to be, and follow their dreams,” Batson said. “And you know, I hope that other communities feel this way too.”

Listen to the full interview with Paige Batson here.

Listen to the full interview with Vigil and Thieves here.