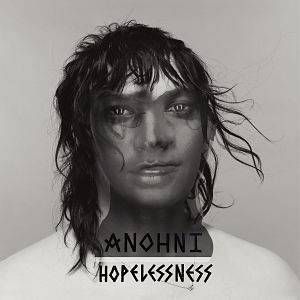 Anohni, a trans woman formerly of Antony & the Johnsons, is now releasing music under her new name along with collaborators Oneohtrix Point Never & Hudson Mohawke. She is a British-born, NYC-residing artist. HOPELESSNESS is her debut album, but she has been in the music for decades, and even was nominated for an Academy Award this year. Her distinctive soulful voice is the most prominent instrument on the record, supplemented by dark electronic sounds that are at time ambient, noisy, and dancey. Her delivery is much as it was when she sang on Hercules & Love Affair’s 2008 track “Blind” — powerful and emotive.

Her use of electronic dance-oriented music as protest music makes this album stand out during a decades-long trend to de-politicize even independent music. Her lyrics are consciously and intelligently political, speaking out against America’s violence at home and abroad and expressing an eco-feminist longing for greater harmony between the earth and its human inhabitants.