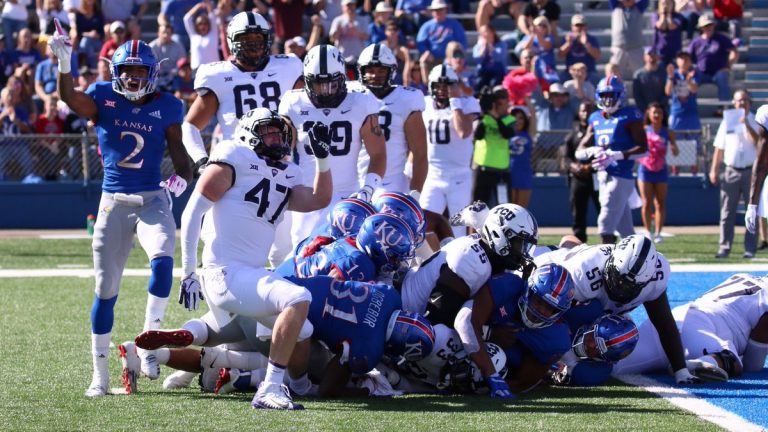 RECAP: Kansas shocks TCU in crazy, back and forth affair

Lawrence, KS – The Jayhawks hadn’t won a Big 12 game in nearly two years, until today. When TCU came to town, not many expected Kansas to come away victorious. Kansas had lost six straight to TCU, most recently with a 43-0 shutout in last year’s game.

However, there were some question marks about this TCU team. Their starting quarterback, sophomore Shawn Robinson, injured his shoulder last week and his backup, sophomore Michael Collins, hasn’t seen much playing time this year. TCU was also coming into the game with one of the biggest distractions of the year. Earlier in the week, their star wide receiver and kick returner, senior KaVontae Turpin was arrested for assault and later dismissed from the team. In the end, his presence was definitely missed on the field, and distracted both players and coaches during practice this week, keeping TCU from playing at its finest.

Kansas, on the other hand, played a solid game in front of a pretty empty crowd at David Booth Kansas Memorial Stadium. Head coach David Beaty said before the game that having the stands empty can be a secret weapon for Kansas, as it shocks the visiting team. Who knows how shocked TCU was playing in the stadium, but Kansas was able to do enough to get the victory.

No one knew who would be the starting quarterback for Kansas, but it was pretty easy to assume that fans would see senior QB Peyton Bender trot out with the offense. Bender then went on to have his best game of the season, throwing for 249 yards and two touchdowns. However, the biggest playmaker on offense was once again freshman running back Pooka Williams Jr. He wasn’t as productive on the ground this week, rushing eleven times for 33 yards. He was, however, the most productive pass catcher for the Jayhawks. He caught seven balls for 102 yards and two touchdowns, including the game winner. He made TCU defenders miss tackles all day and he was able to get an open field in front of him to set the Jayhawks up for the eventual game-winning touchdown. TCU left him open many times, and Pooka made them pay for it.

The Jayhawk defense also played very well against this TCU offense. They were able to limit them to ten points in the first half and they were able to get a 4th and goal stop at the one-yard line to keep TCU from scoring more points. They were also able to force a couple of turnovers in the second half, which included an interception that set Kansas up inside the red zone, and ultimately led to a field goal. The other turnover was the play of the game, forcing a fumble and recovering as TCU was knocking on the door of a go-ahead touchdown. This essentially allowed Kansas to run the clock down to a few seconds, purposefully give up a safety, and punt the ball in the final seconds to seal the victory.

This win for Kansas also means this season will be the best record for David Beaty since becoming the head coach in 2015. There are still lots of things that KU can improve on, but they were able to do just enough to get the win this week. Big 12 wins are few and far between for Kansas football, but they need to stay focused on the road ahead, as three of their final four games are against top four teams in the Big 12.